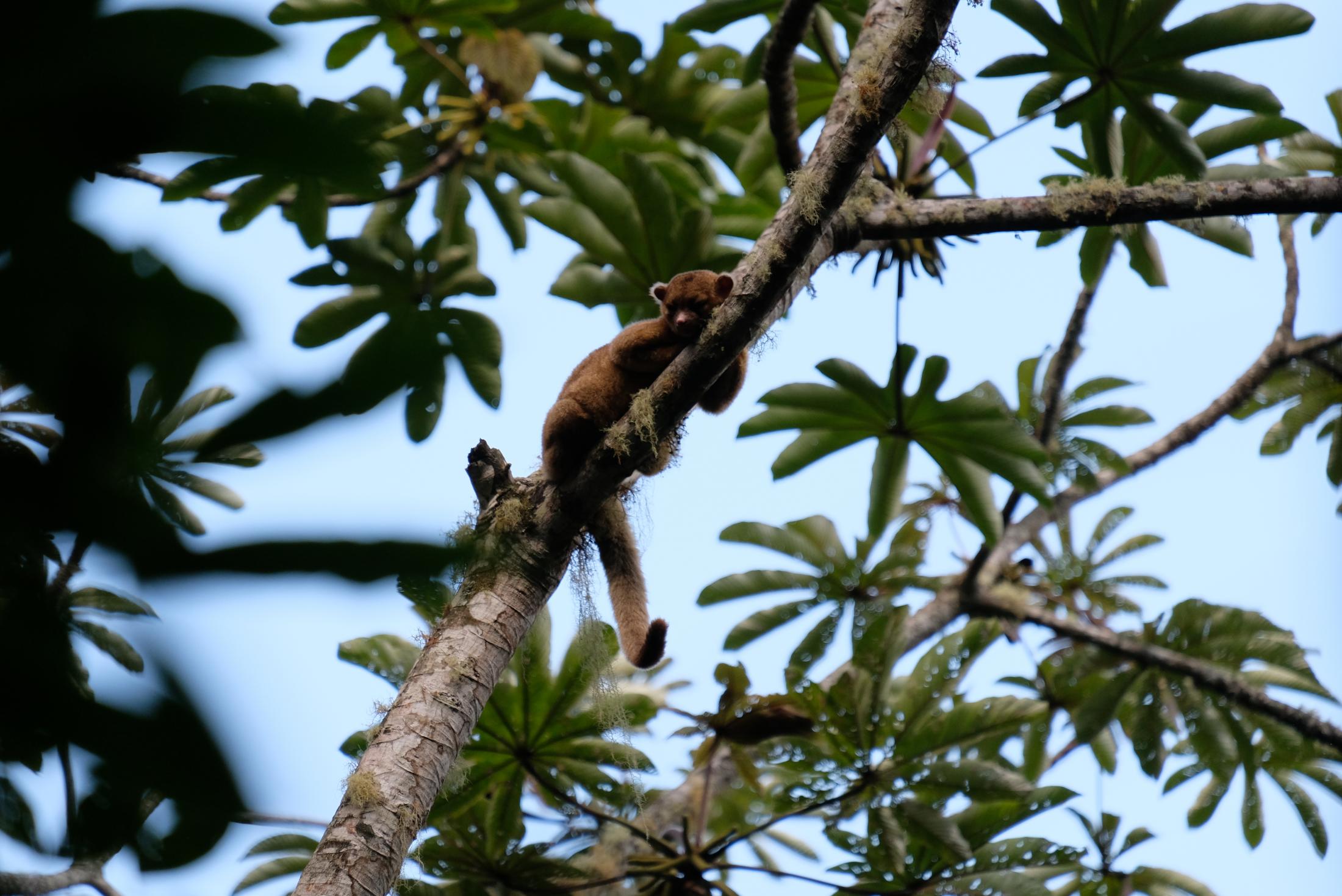 Kinkajous (Potos flavus) are highly elusive and nocturnal animals that feed at the top of the canopy. Therefore, they are hardly ever seen by people. They are highly skilled climbing marsupials that disperse seeds in the rainforest.
Due to deforestation, illegal trade and habitat degradation, their numbers are decreasing considerably across the Americas. Our team of scientists were very lucky to spot this kinkajou feeding and napping so low in the canopy on my first-night camping in the forest. 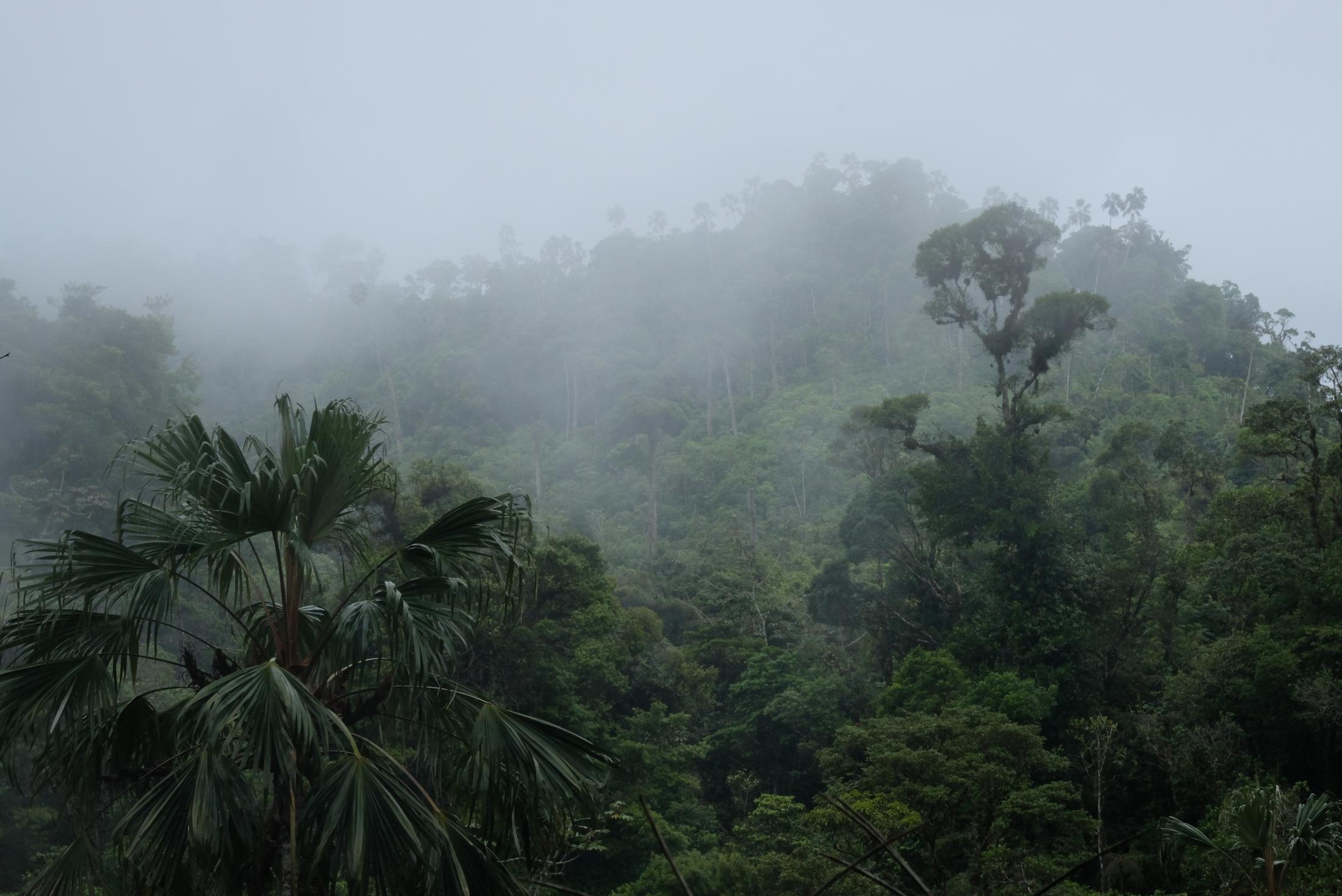 Tropical Mountain Cloud Forests boast high levels of endemism due to their microclimates and topographic heterogeneity. Incoming clouds provide a high proportion of the water used up in the forest. Epiphyte plants take charge of absorbing the water droplets and sharing it with their tree host. 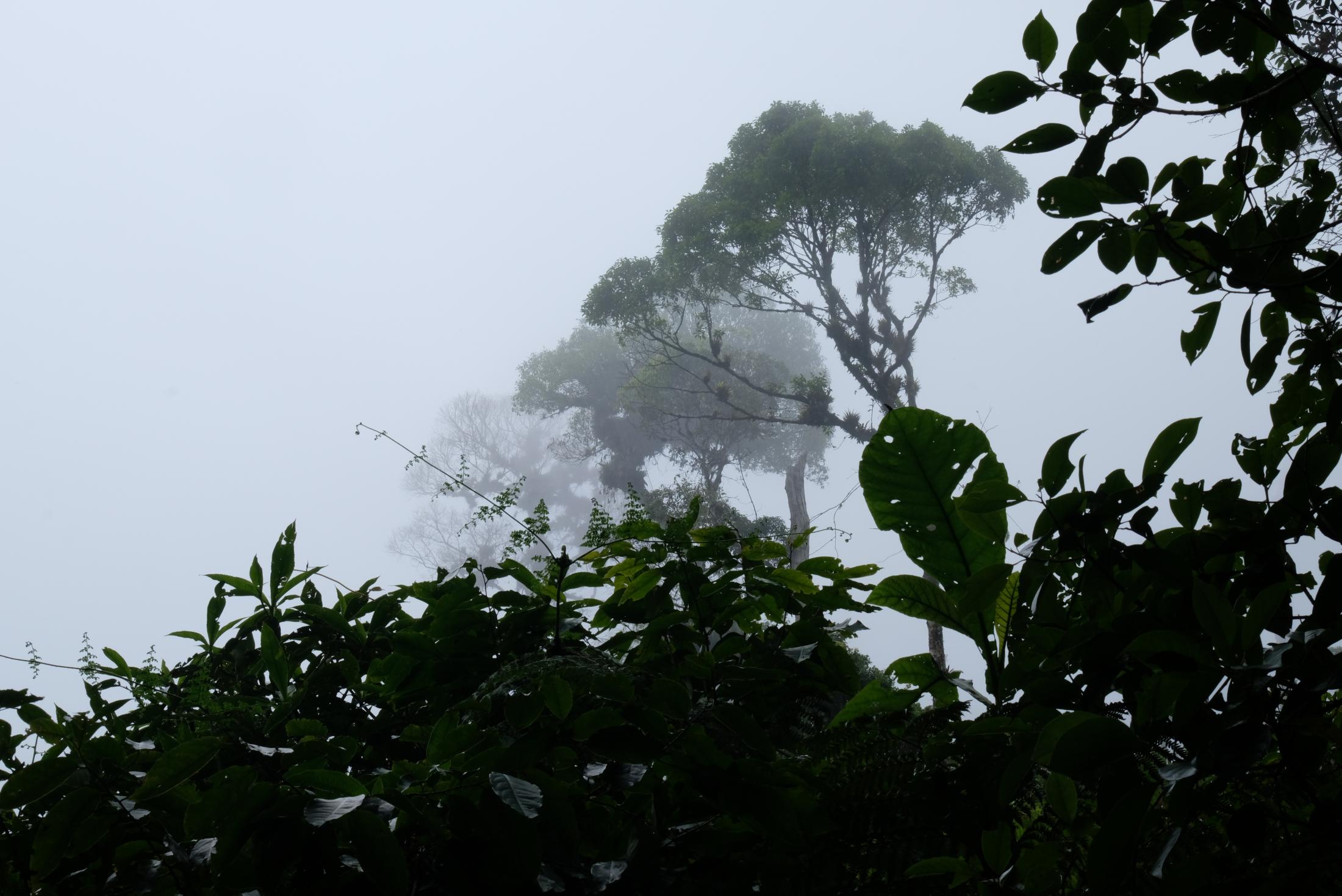 Therefore Cloud Forests are most at risk of the effects of climate change. Increasing dryness and temperatures will have a massive impact on cloud formations and microclimates. Most flora and fauna living in cloud forests depend on microclimates: mainly, a unique combination of humidity and temperature.
Amphibians such as salamanders and frogs will be most affected due to their sensitivity to climatic conditions. 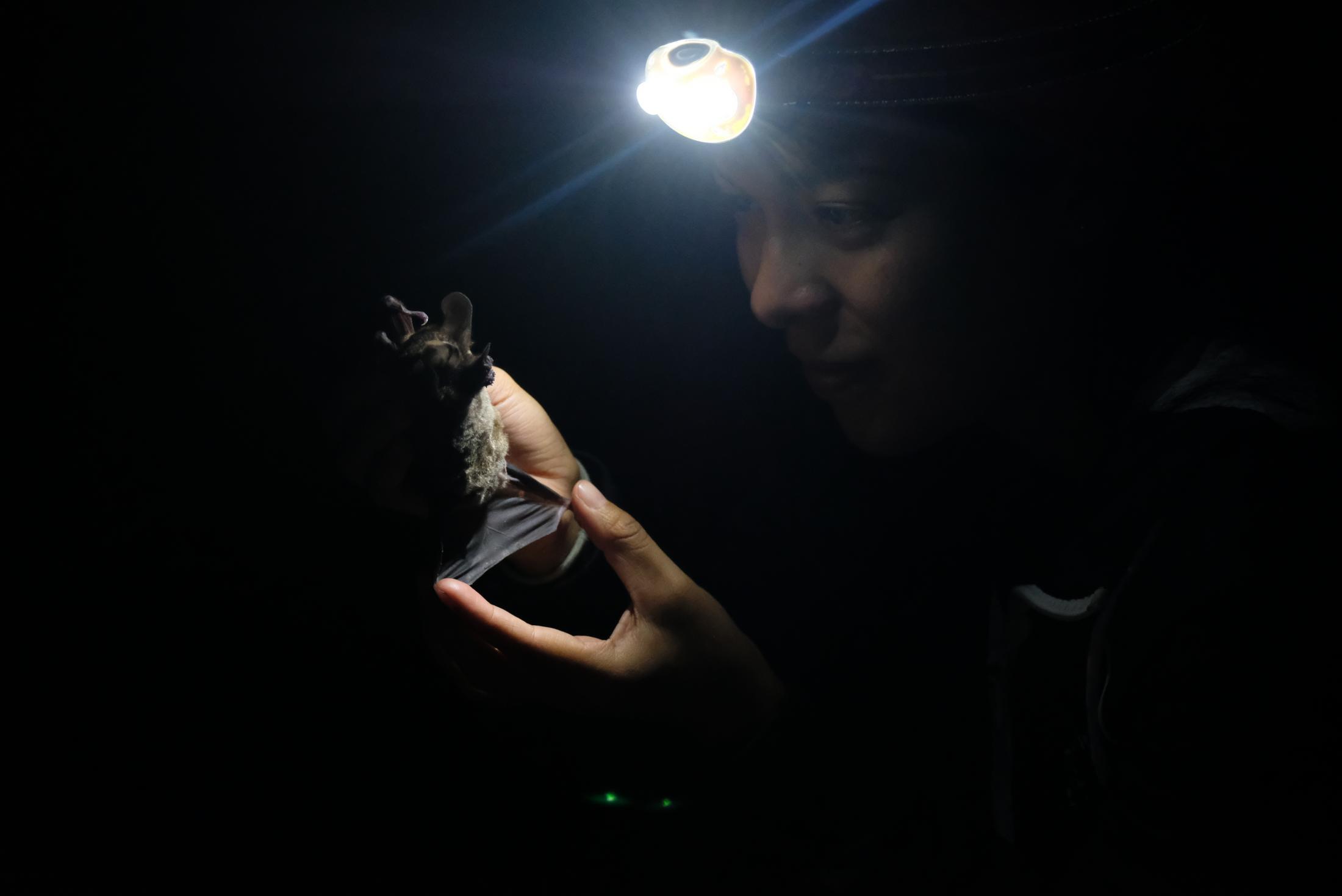 There are around 35 species of Bats in Cusuco National Park. Species diversity of bats depends on the heterogeneity of the forest. A study in the area highlighted the core of the rainforest as an important source of bat populations and diversity. Bats can travel between roosts, dispersing seed and pollen, and also controlling insect populations!
As illegal logging is reaching the core of the forest, where will all the bats go? 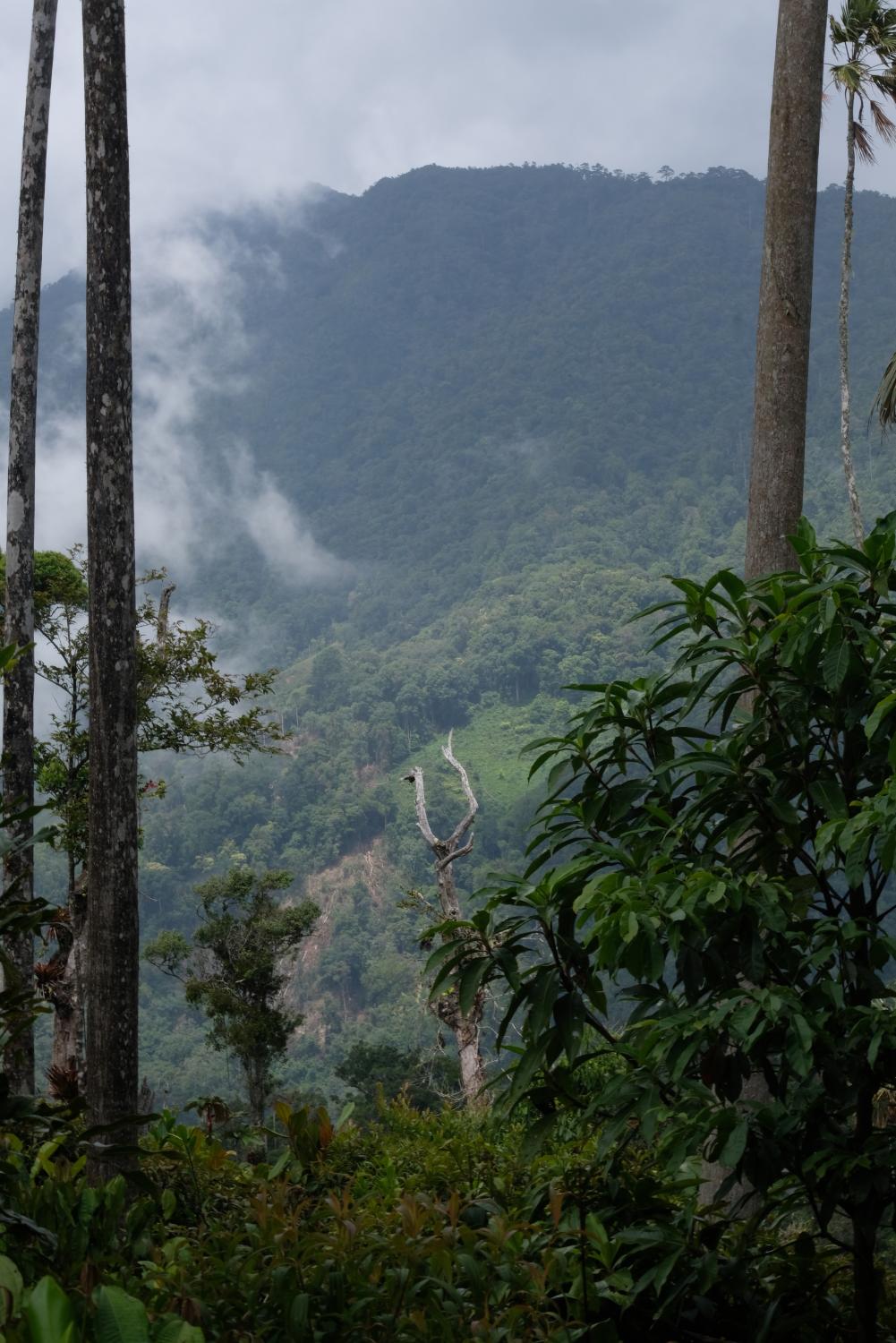 A newly deforested patch of forest in the core of Cusuco.
Cusuco's protection is only on "paper" and the Northside of the core of the forest is being heavily deforested. 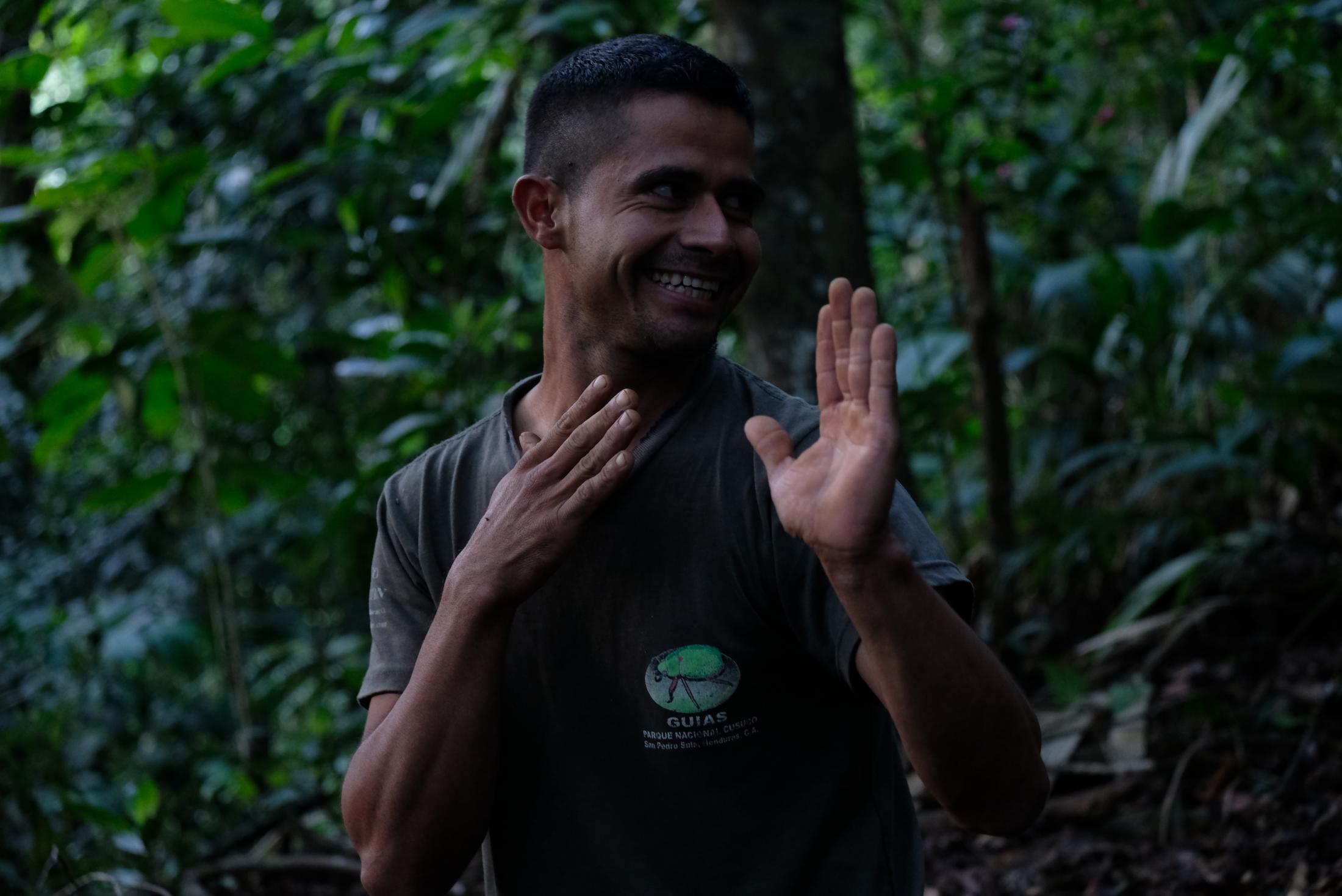 My experience in Cusuco wouldn´t have been the same without strong conservation guide Marvin. It is hard to describe the passion and intelligence od Marvin. If not working as a guide in Cusuco, he worked at the coffee farms in his home Buenos Aires, neighbouring CUsuco National Park. He is studying English and hopes to one day be able to go to the US to work. He told me violence and corruption are hurting his country and so many people like him hope to find safety away from their home. 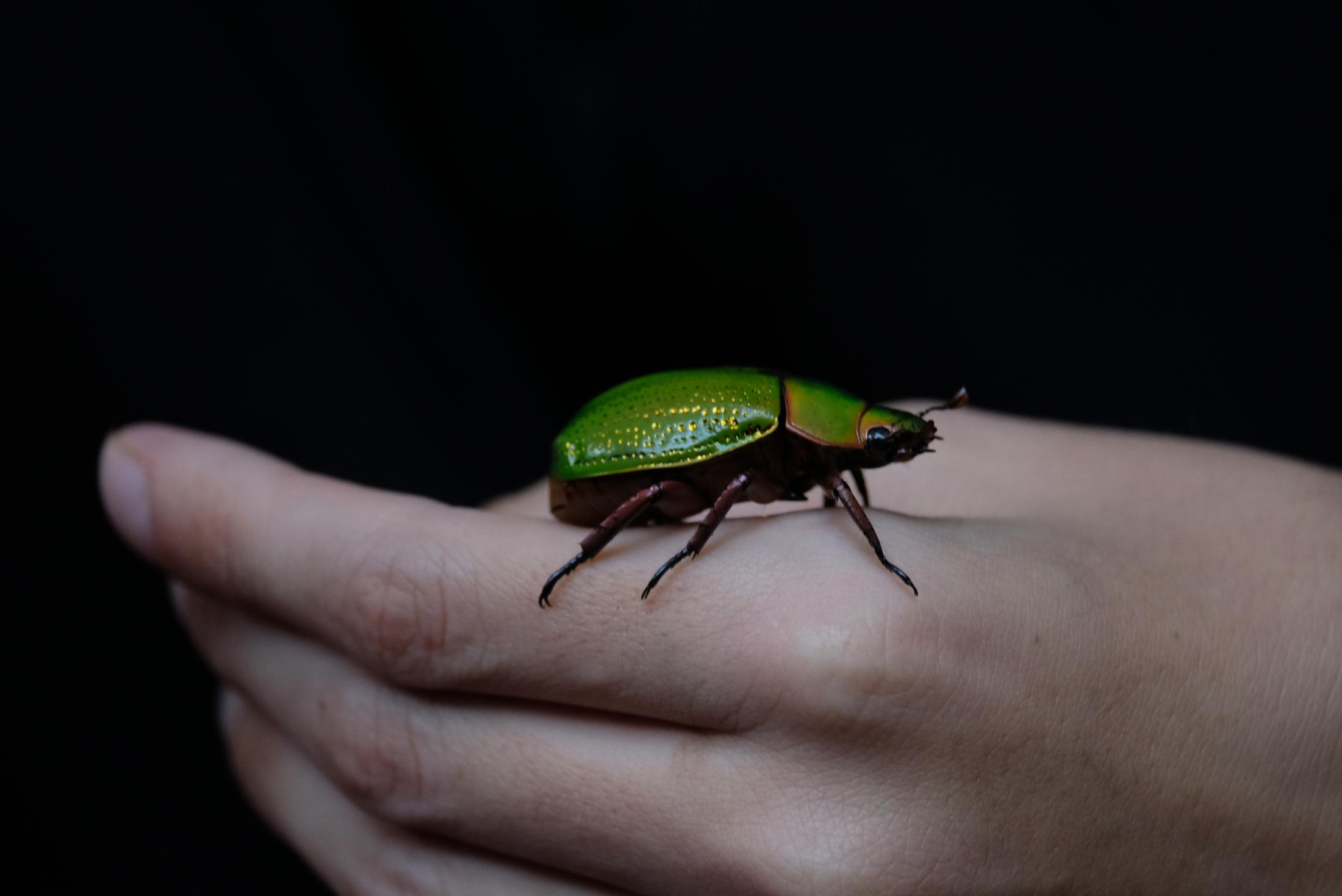 The hidden diversity of Cusuco National Park explodes out during the night. Jewel Scarab beetles are very rare, but out here their diversity and beauty of each sub-species are incredible. Slight touches of gold color in its bright green carcass stand out of all other beetle species.
As Charles Darwin brilliantly once said, "the creator is inordinately fond of beetles". 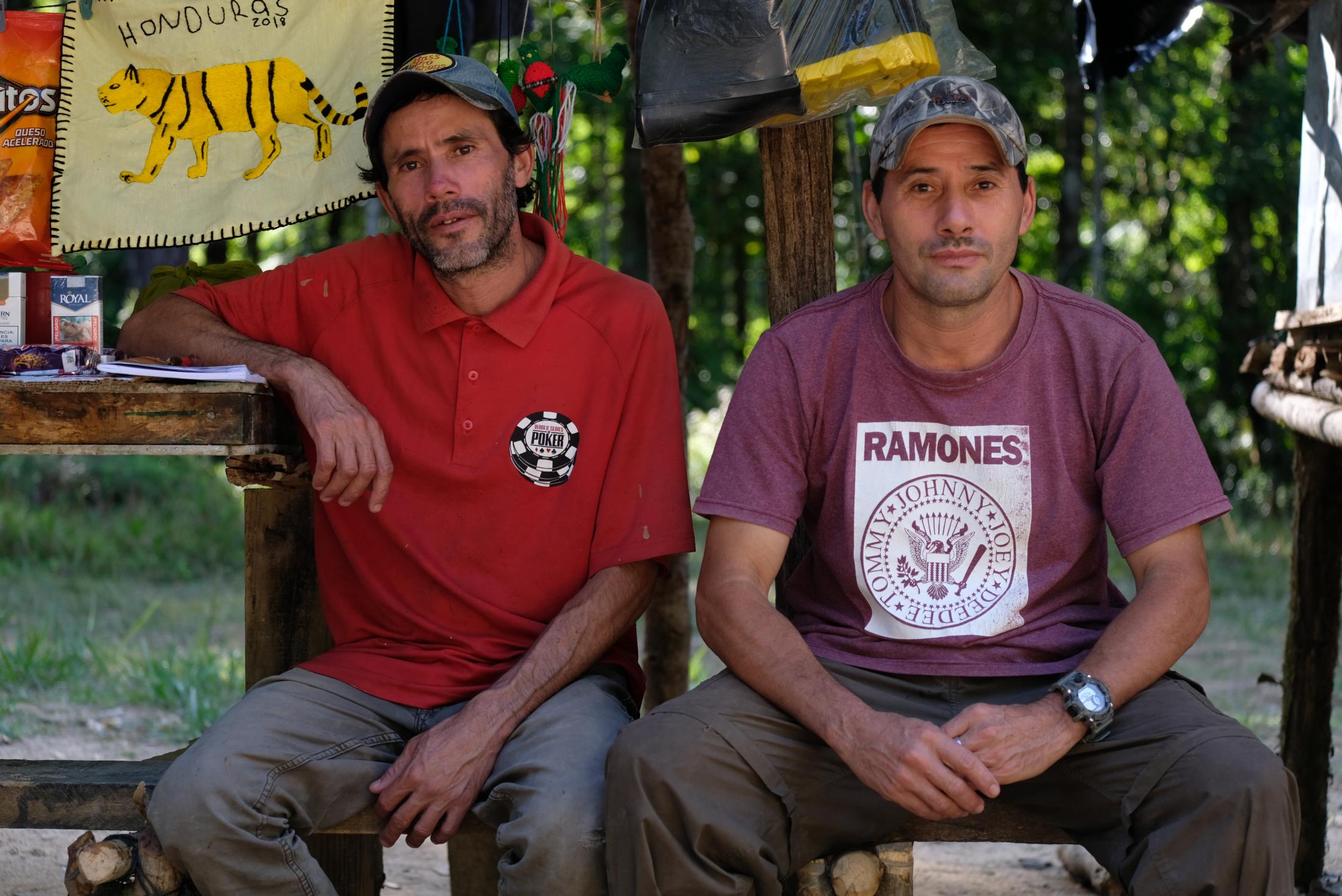 Brothers Reynaldo and Chito.  They were one of many Hondurans hopeful of selling their products that ranged from Doritos bags, Cigarettes, rubber boots, to Organic Coffee. If you asked for a product, they would bring it to you within two days.
I enjoyed talking to them about their life outside the camp. They both tried to cross to Mexico and the US, however, were caught by migration officers and sent back to Honduras. Both are coffee farmers, but they depend on earnings from the seasonal summer arrivals of scientists to the research camp. 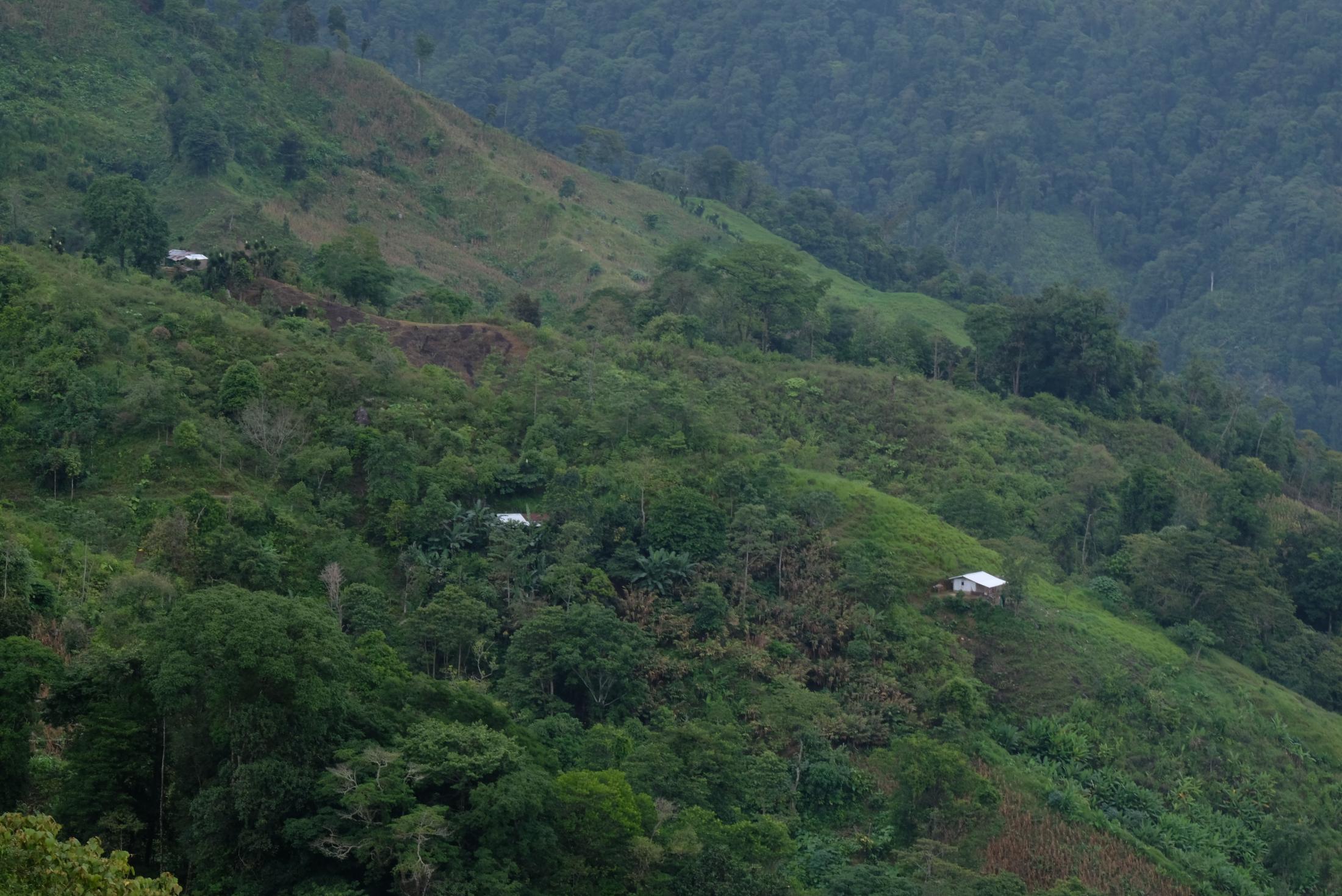 Coffee farms, in the buffer zone of the reserve.
I heard many stories of the deteriorating land and poor climatic conditions that were preventing many of growing their coffee. A consequence of climate change? Are many farmers moving further up to looking for colder temperatures? Causing further deforestation in the process. 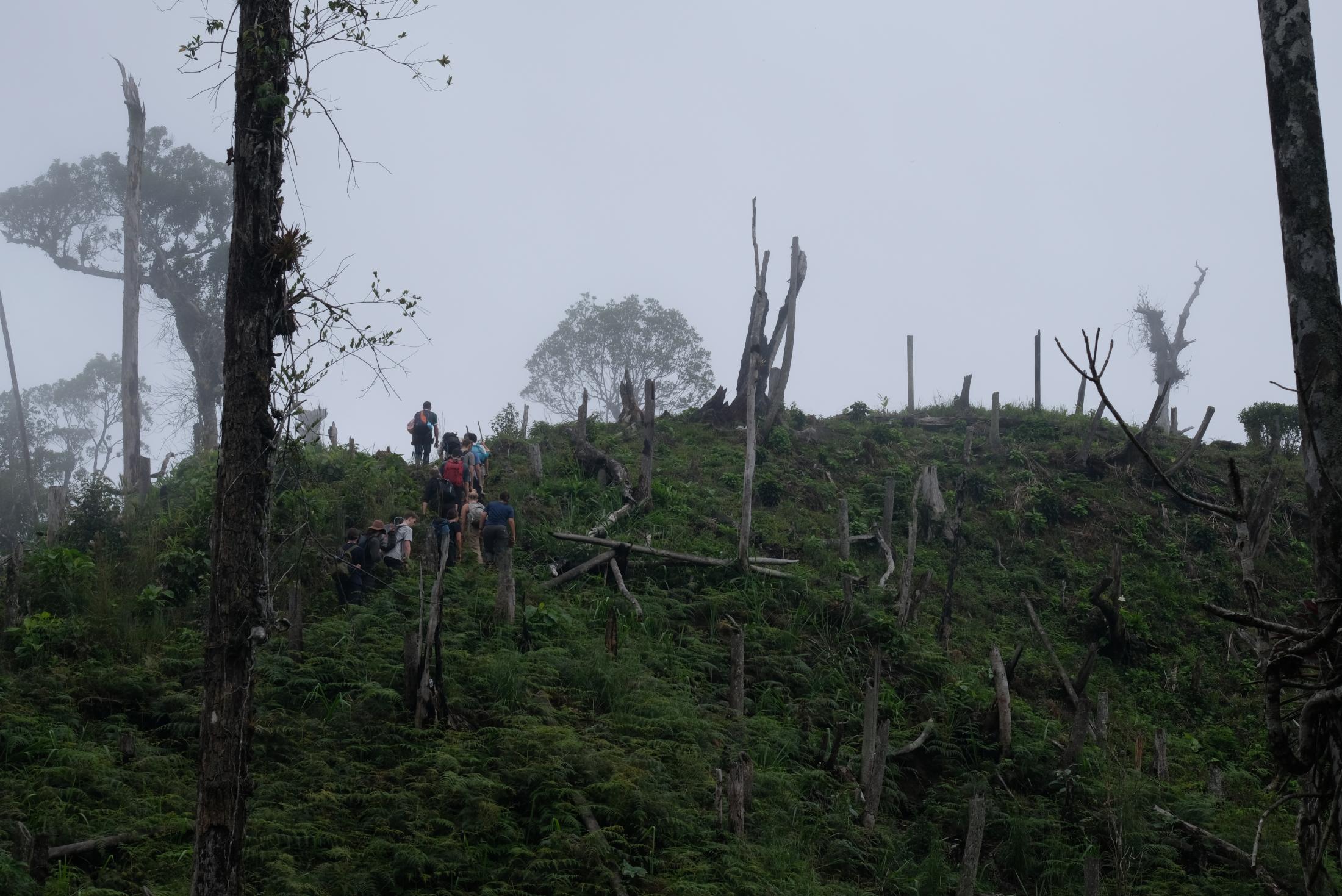 Newly deforested patches that are really close to the Core of the forest. 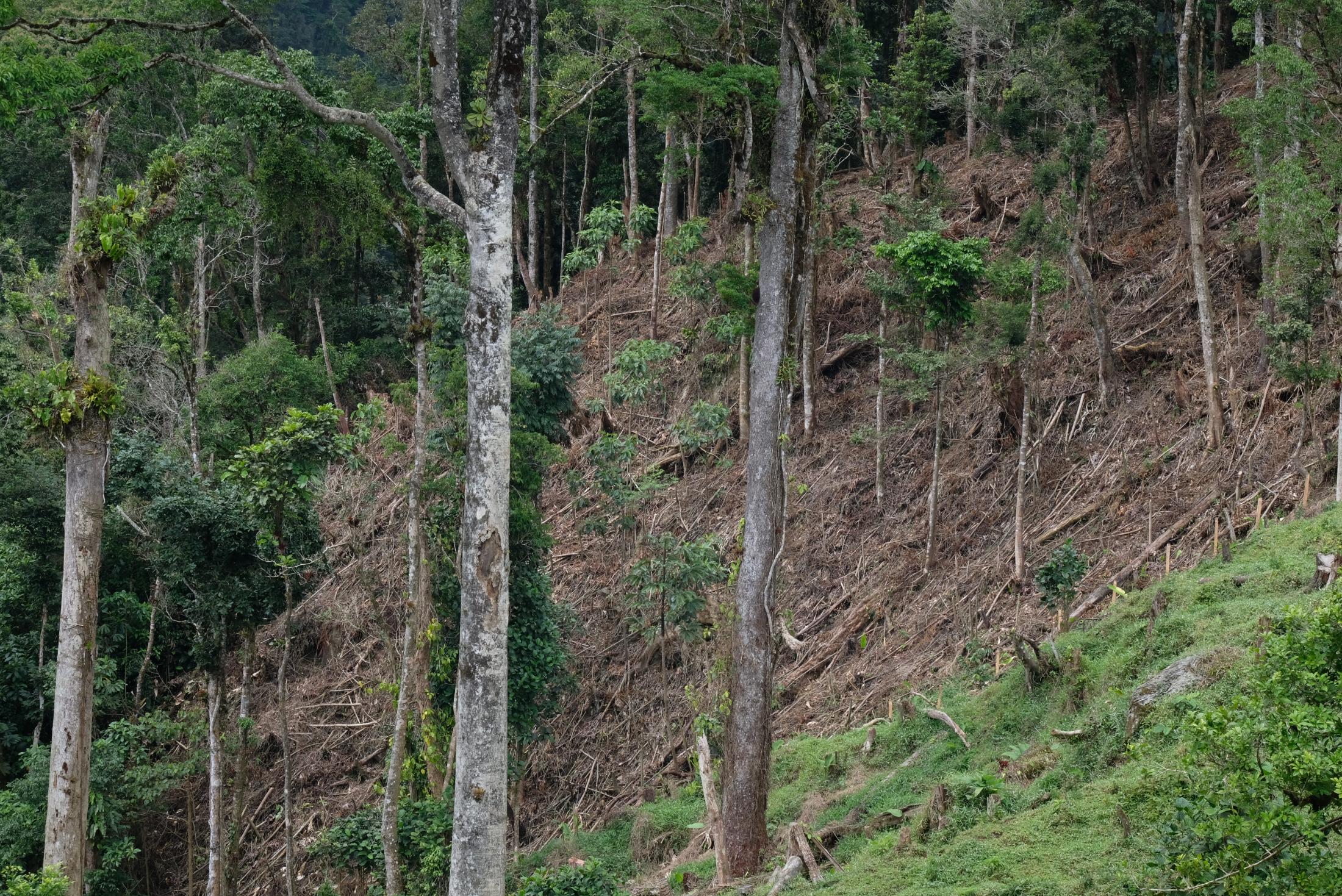 Deforestation maximizes the effects of climate change because it decreases the surface area of the forest and exposes the core area to drier conditions and higher temperatures. Meaning that not only that part of the area is affected, but the whole forest. 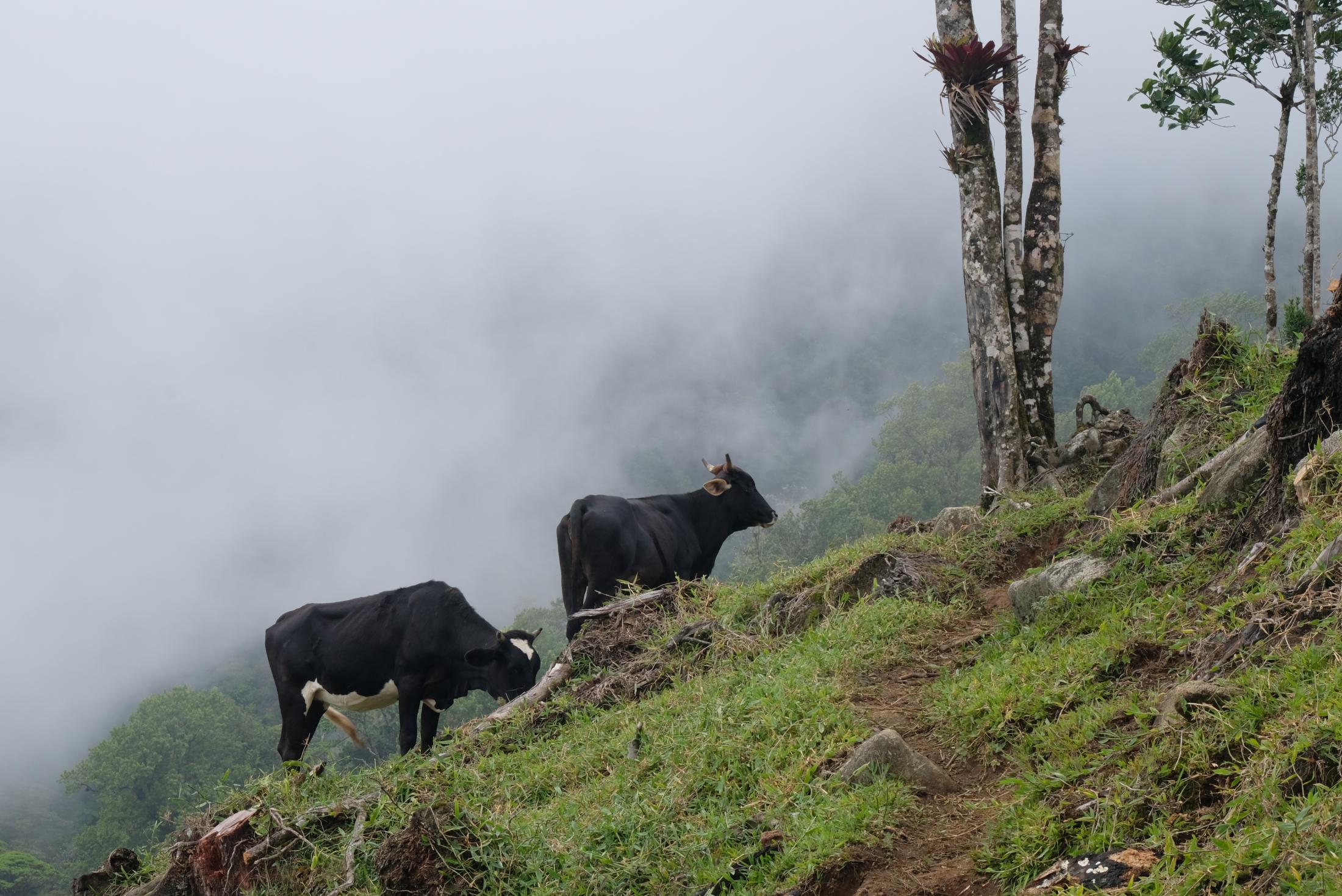 Cattle ranchers are moving up to deforest further and further up. Cows need space to graze and live, but the forest is a big constraint to the accessibility of land.